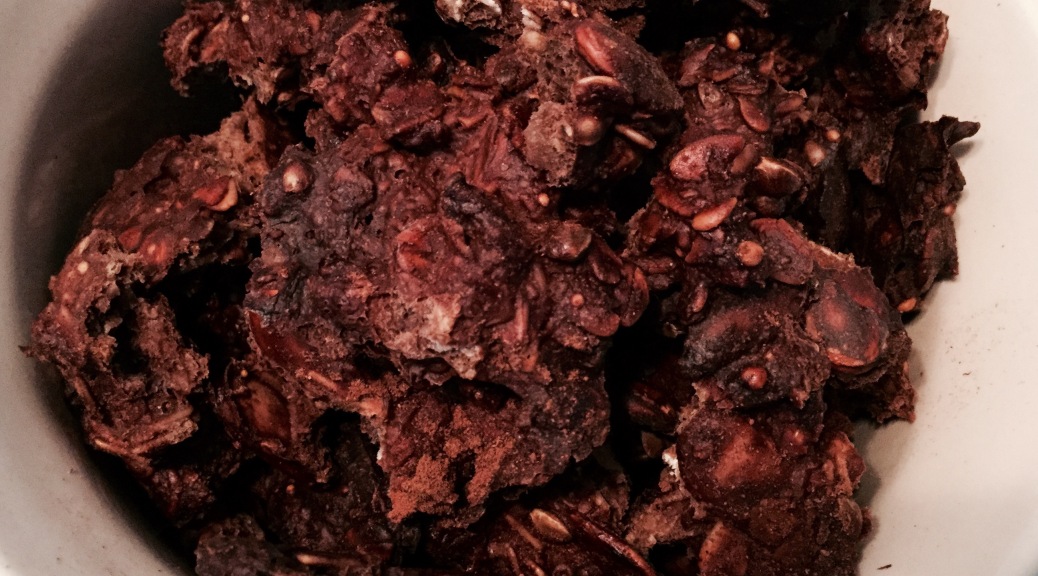 When it comes to sweet foods, I usually say that if it doesn’t have chocolate, what’s the point! However, I make an exception to this when it comes to cinnamon. Cinnamon rolls.. Will have to work on a recipe for those. In the meantime, I wanted to try COMBINING chocolate and cinnamon in this granola recipe. The combo of having both cinnamon AND chocolate is so good!  As you have probably noticed with many of my sweet recipes, I like using ripe bananas for a natural sweetener and oil substitute in one! If you don’t like bananas or have an allergy, you could subs applesauce, but it won’t be as sweet naturally as the bananas and you might need to add another sweetener.
You need:

Spread onto cookie sheets lined with parchement paper. If you want crumbly granola, spread this mixture very thin, but I make mine fairly thick and then get bigger granola pieces that I can pick up and munch! 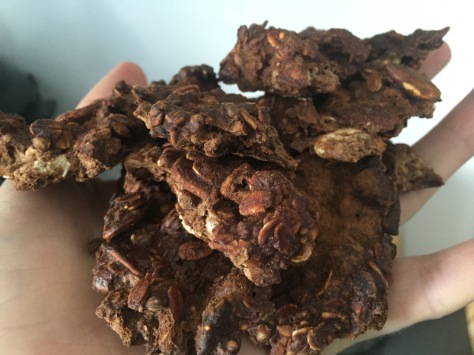 Aka acai superfood bowl! ( way more exciting than the Super Bowl…)
A week ago, I was in sunny San Diego and didn’t catch a minute of the game. It was blue skies, beaches, and superfood bowls. It seemed like every cafe or brunch spot in town was serving a version these fresh healthy breakfast bowls. After having different variations of this at 2 different locations I vowed that I would create my own! So I took the best parts of each one and made this. This recipe is perfect for sharing as a snack or dessert or makes a meal for one.

Blend the above ingredients on high, pour into a bowl.

Top with fresh fruit, fresh granola, and shredded coconut! I used fresh blueberries, blackberries, and sliced bananas for toppers, but strawberries are also go reat. I highly recommend making your own granola here. It really takes this bowl to another level.

Enjoy any time of the day and transport yourself to the beaches of Del Mar, where there is nothing but sunshine, waves, and blue skies 🙂 Just what I’m dreaming about with all this weekend rain. 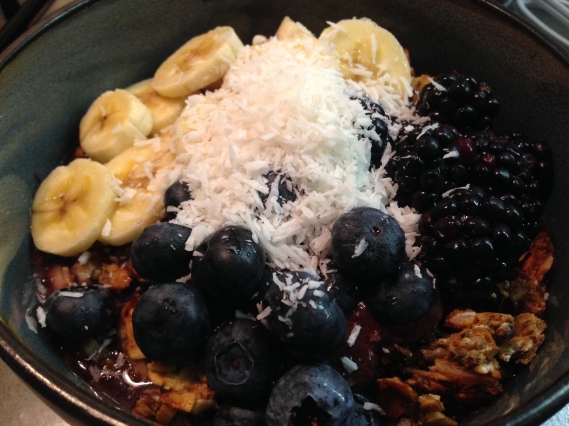 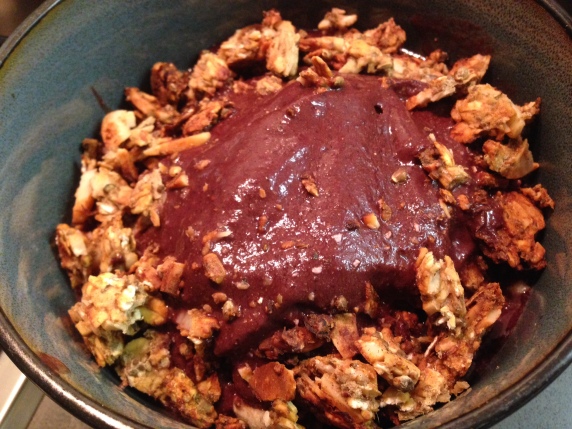 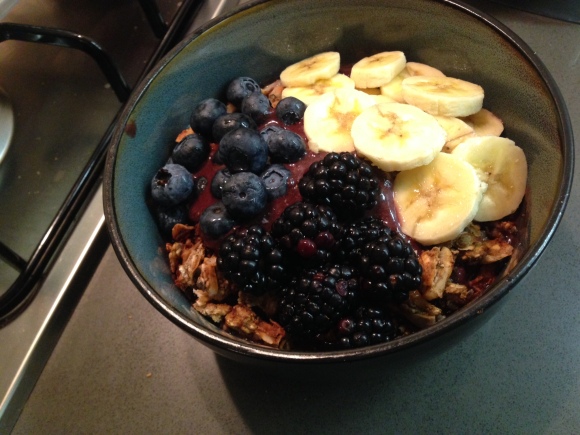 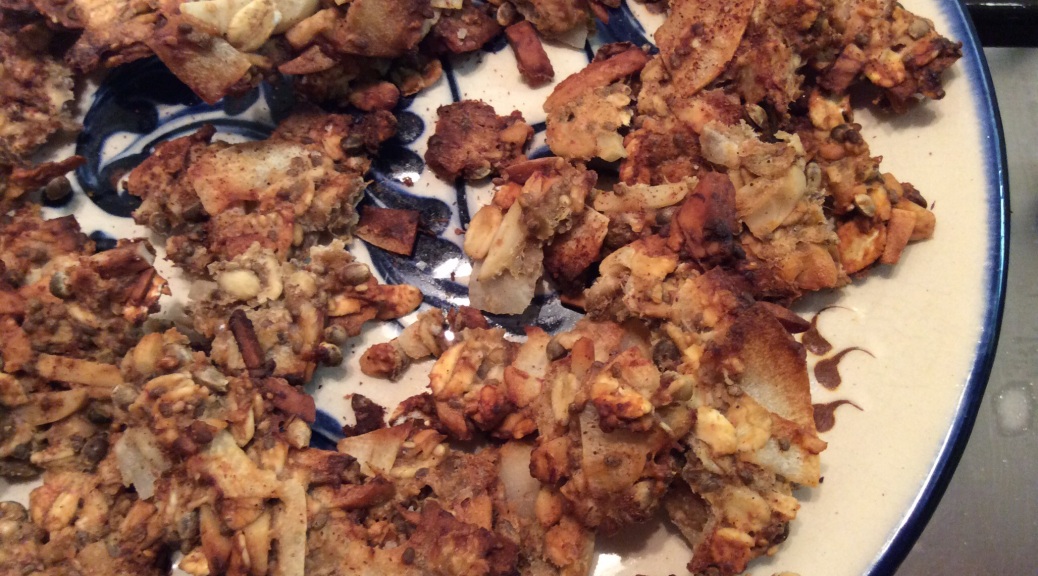 I’ve always been in LOVE with granola, but I hate the calorie and sugar content in commercial granola. It’s like “heeeeyyyyy I thought this was supposed to be a health food!?!?”. So time to make my own, no sugar, only the natural sweetness of bananas, crispy gluten free oats, coconut flakes, seeds and nuts. A little cinnamon and sea salt, some time in the oven, and BAM happy dance in my mouth, sans guilt. YAYYYYYYYYYY, dreams DO come true 😀 I love that this granola naturally lends itself to large chunks of granola. You can always crumble it up if you life, but at least you have the option to pick up big pieces and munch like granola bars. Heaven 🙂

Combine all ingredients; turn onto a greased cookie sheet.

Bake at 350 on coconut sprayed cookie sheet for 15minutes, take out and flip, breaking up pieces. Bake another 10 min. Then remove the edges that are starting to brown and set aside, breaking up large pieces of granola as you go. Turn heat down to 300 and bake another 10 min, watching carefully to make sure your are not exceeding a golden brown. Remove, cool, and enjoy! 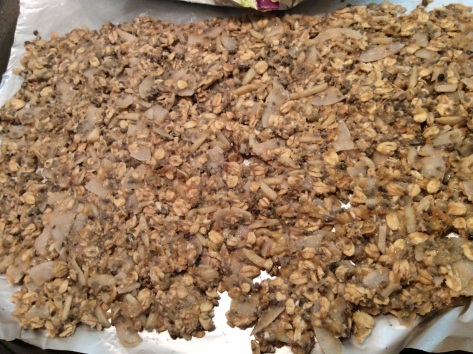 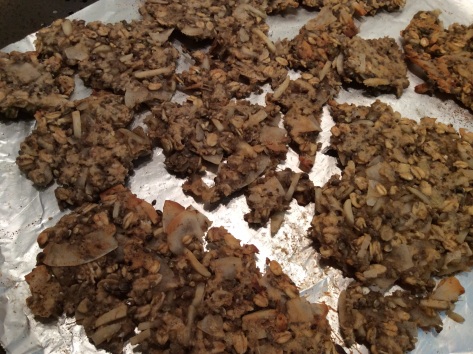 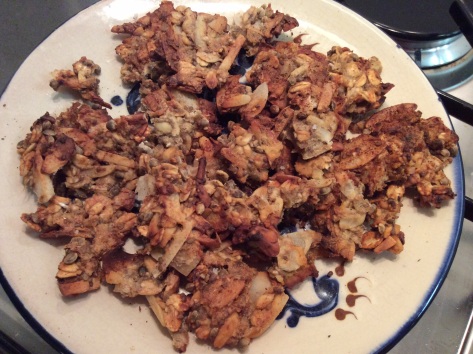 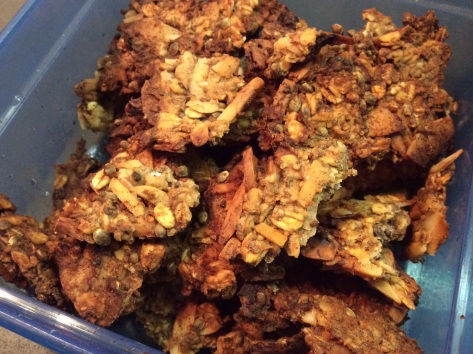